MariEve Lauzon, flutist and Véronique Couturier, harpist, have teamed up to form the duet known as "Les Muses". This flute and harp duet specializes in playing background music for special events and concerts.

The "Les Muses" flute and harp duo sprung to life in 1998, during a music lesson at the Montreal Academy of Music.

On several occasions, they have been award winners playing as an ensemble at the ARAM Music Contest and they have performed at a variety of events, such as the Quebec National Holiday festival.

This charming duet will provide the finishing touches to render your occasion an unforgettable experience!

The ethereal resonance of this duet is simply divine. It is undoubtedly a sure thing for all your events.

Following her studies at the Academy of Music, under Carolyn Christie's tuition, Marie then graduated with a master's degree from the University of Montreal in May 2004, this time coached by Lise Daoust.

Throughout her studies, she showed a real interest for contemporary music and participated enthusiastically in the music workshops directed by Véronique Lacroix (ECM) and by Lorraine Vaillancourt (NEM).

She regularly performs in concerts accompanying small ensembles and orchestras, as well as in “Les Muses” flute and harp duet.

She is also a member of the In Extensio ensemble, playing alongside the percussionist Barah Héon-Morissette and the clarinetist Louis Campbell. During the 2006-2007 season, "In Extensio" was performing at the historic Bon-Pasteur chapel as well as in the "Évolutions" series of concerts presented by "Innovations". 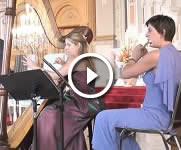 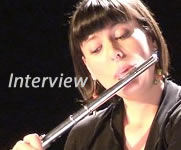 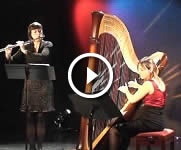 Extracts of the concert from "Les petits dimanches ensoleillés" event in Sorel.

"Les Muses" at the Conservatoire 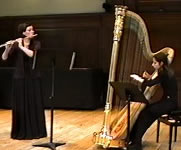 The beginning of "Les Muses"

Rehearsal at the "Conservatoire de Musique de Montréal" in 1998
The flute and harp duet will add magic to cocktails, brunches and baptisms.